Eco-Friendly Ways to Dispose of Your Old Underwear

Skip the trash and learn about the different ways to sustainably part with your old underwear.

We’re always the first to say that we’re on the journey of becoming more sustainable together. That’s why we wanted to loop you in on a rather delicate question we’ve been asking ourselves because we think you might have the same one.

Since The Goods dropped, we’ve been really inspired to look at our underwear drawer in a new light. Moving forward, we’re ready to say goodbye to synthetic underwear (they honestly weren’t even that comfy to begin with) to make room for The Goods. Not only do they feel like a hug from a cloud, but we’re so on board with the benefits they have for our planet. It’s exciting to feel like we’re actually making a difference when we get dressed in the morning.

So now to our question. As we made this transition, we found ourselves asking, “What do we do with the old pairs of underwear we’re letting go of?” If we put them in the trash, we knew they would join the over 35 million tonnes of textile fabric sent to landfills every year and then sit there for decades before decomposing. This didn’t feel like a great option, so we set out to find a more sustainable alternative.

The answer we discovered isn’t straightforward, so we broke down your options for sustainably disposing of your underwear based on their condition. The options might vary depending on where you live, but we applaud you for just making the mindful decision to keep your undies out of the trash — spending time exploring your options with the betterment of the planet in mind is an accomplishment in itself.

New underwear that has never been worn or worn once

If you’re cleaning out your drawers and find a new pack of underwear or a pair you tried on once but didn’t like, considering donating these. Charities and local shelters often accept new or like-new underwear. Do a quick search to confirm what they accept in your area before donating, and always make sure you donation has been washed and dried.

For used bras, non-profit organizations like I Support the Girls and Free The Girls will direct the bras you no longer want to women in need. I Support the Girls collects new and gently used bras and sends them to women in shelters, while Free The Girls works with services that rescue women and girls from sex trafficking, who can then start their own businesses selling donated bras. Both accept donations via drop-off or mail and are just a few of the many organizations using donations to uplift women in need.

Underwear that has been worn but not in terrible shape

We found this was the case for most of our undies. They’ve definitely had their fair share of wear but aren’t falling apart at the seams. For these pairs, we’ll start by saying that even if these underwear aren’t the most sustainable pair in your drawer, keep them a little longer and really get your wear out of them before sending them on their way. Our ultimate goal is to reduce waste, so if you can wear them a little longer, we’d highly recommend transitioning out less sustainable pairs gradually over time.

If they simply can’t stay in your drawer, there are two routes you can take here. If the idea of getting crafty with an old pair of undies isn’t up your alley, you can skip to the next section. And hey, no judgment. But if we’ve piqued your interest with this statement, read on.

We know everyone’s comfort level around this won’t be the same, but we wanted to throw some ideas out there to get the ball rolling when it comes to ways you can upcycle your intimates.

Underwear that is falling apart and definitely has to go

If you have underwear that’s hanging on by a thread, first see if you can identify what kind of material it’s made of. Fabric made from 100% natural fibres like cotton can be composted as long as it’s not blended with synthetic fibers. Before putting your underwear in the compost, make sure to shred the fabric finely and remove non-compostable elements like elastic bands. If you aren’t certain what material your underwear is made from, skip the compost and hop online to look for a local textile recycling program.

Simply saying your underwear will be recycled felt a little vague to us, so here’s what’s actually happening. The first step in recycling unwearable material is to sort it, as natural and synthetic fibres are recycled differently. Natural textiles are then either pulled into fibres or shredded to create yarn for weaving or knitting. If fibres aren’t spun into yarn, they get compressed into textile fillings for things like mattresses. The process for recycling polyester-based materials is a little different. These textiles are granulated and shaped into pellets then melted and used to create fibres for new polyester fabrics. As you can see, although it might take more of your time to recycle your underwear, doing so ensures that both natural and synthetic pairs are re-used and kept out of the landfills.

And that’s it. You’re now in the know when it comes to the sustainable ways to part with your old underwear. To summarize, you can: 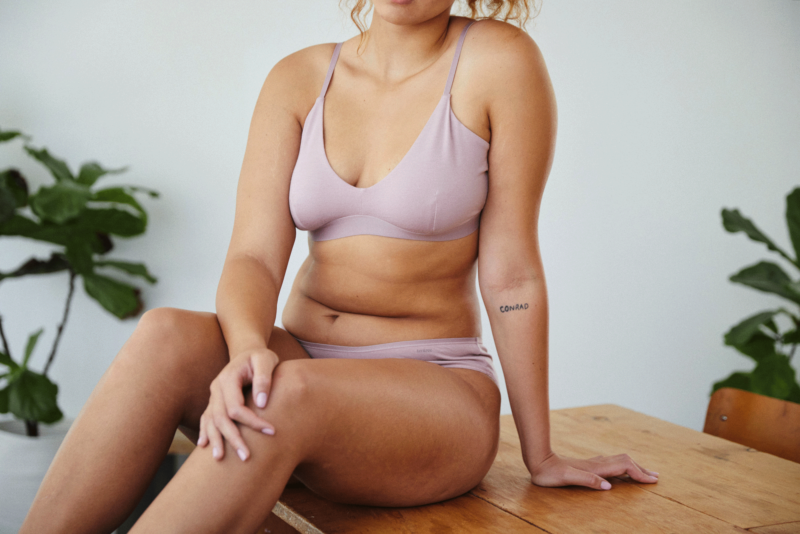 We know the convenience of tossing them in the trash is alluring, but the extra effort helps keep unwanted textiles out of landfills and is one step towards a healthier planet. Make sure to check out The Goods for men and women and upgrade to the most sustainable and comfy underwear on the market.

Your Guide to Experiential Gifting

How to Stay Warm This Winter

3 Ways to Style a Puffer Vest

What We’re Reading This Summer

How To Style Your Activewear

How to Connect with Nature When You Live in The City

10 Ways to Cook with Food Scraps

What We’re Reading This Spring