From Production To Destruction: A Breakdown Of The Single Use Plastic Crisis

The environmental impact of single use plastics go far beyond litter.

The single use plastic crisis isn’t exactly new. Plastic straws, grocery bags and six-pack rings have been getting an increasingly bad rap for the last few years, which has prompted some incredible change towards environmental-ish living.

But if you’re looking to understand the big picture around single use plastic, and its impact on people and planet throughout its entire lifecycle, we’ve got you covered. We’ll give you a hint — there’s a lot more to it than litter.

Here’s a deep dive into the single use plastic crisis: where it started, emissions from plastic production, its toxic effects, the waste it causes and microplastics. If you’re already feeling overwhelmed, we get it! This is a huge topic to tackle, but we believe that with small steps, we can make some big changes in the health of our planet. If you’re looking for some practical steps to combat the single use plastic crisis, check out our Ultimate Guide to Plastic Free Living.

Ready to dive in? Let’s do it. There’s a lot of info in here, so feel free to jump around to whatever topic is most helpful for you.

Where did the single use plastic crisis start?

Bakelite was the first synthetic plastic ever created, kicking off the global plastics industry in 1907. The overwhelming growth in the world’s plastic production didn’t really start until the 1950s.

As plastic production has increased, what are we doing with it when we’re done using it?

From it’s very inception, single use plastic wreaks havoc on our planet. Plastic is simply a form of fossil fuel. Your plastic water bottle, your grocery bag, your mesh bag of avocados, they’re all made from oil or natural gas. And it takes lots of energy to make that happen.

Carroll Muffett, head of the Center for International Environmental Law, has said that emissions from plastics production and incineration combined could account for up to 56 billion tonnes of carbon between now and 2050. That’s 50 times the annual emissions of all of the coal power plants in the US.

Why the big numbers? Even though we’re aware of plastics devastating effects, plastic production is actually expected to almost quadruple by then, based on research by the World Economic Forum. The American Chemistry Council says the US industry plans to spend $47 billion on new plastics-production capacity over the next decade.

“The key message that people should take away is that the plastics crisis is a climate crisis hiding in plain sight,” Muffett says.

Industries That Produce (And Waste) The Most Plastic

In a study conducted in 2017, the main contributors to single use plastic were broken down by industry: 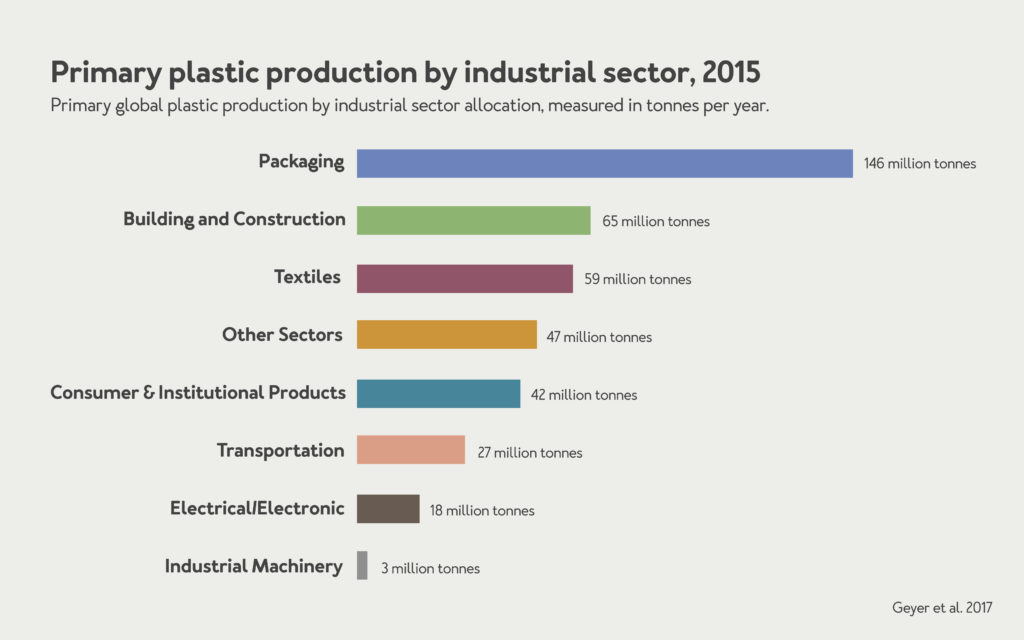 And here’s the plastic waste produced by those same industries: 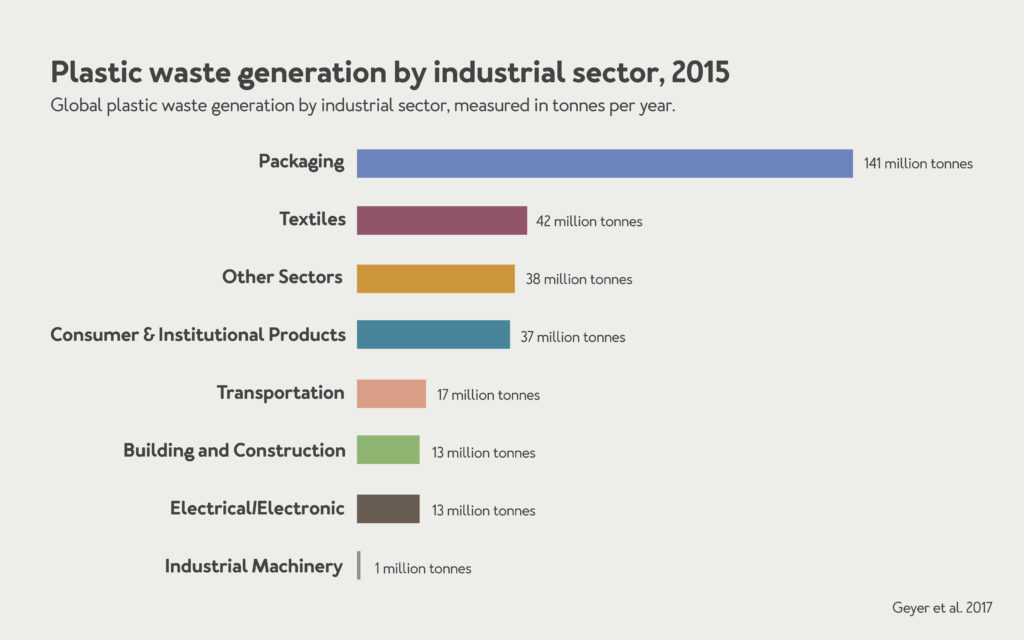 Before plastics are thrown away or broken down, they’re already dishing out harmful effects. For many of us, cutting out plastic completely isn’t always possible. But not all plastics are created equal — some are incredibly toxic to you and the planet.

If you look at the bottom or side of a plastic container, you’ll see a triangle made of arrows with a number inside ranging from 1 – 7. That number represents the type of plastic used in the container. Here are the ones you should always avoid.

Why it should be avoided: Polyvinyl Chloride (PVC) is an incredibly toxic plastic that contains deadly additives like lead and phthalates. Avoid these plastics where possible, and toss or recycle plastics that are scratched or damaged.

Why it should be avoided: Styrene is incredibly toxic to the brain and nervous system. Though styrene levels are generally low in food, it’s still recommended to avoid this kind of plastic.

Where it can be found: Lining of cans, plastic CDs and DVDs, eyeglasses, lighting fixtures, sport bottles, lids, and more.

Why it should be avoided: This plastic contains bisphenol A, which can disrupt endocrine functioning by mimicking hormones in the body or interfering with their actions. Thankfully, bisphenols can be flushed out of the body quite quickly, so cutting them out can have immediate effects.

This is the big, most obvious effect, and it’s only gotten worse since the pandemic started.

The Pandemic And Single Use Plastics

Did you know that every month, according to WHO, the world uses 89 million single-use medical masks, 76 million pairs of medical examination gloves, and 1.6 million protective goggles to equip healthcare workers?

But the PPE problem is only part of the pandemic plastic crisis. With more people staying home, the amount of packaging used in online shopping and takeout has caused an incredible amount of plastic waste. According to a survey cited by the LA Times, Singapore’s population of 5.7 million threw away an extra 1,470 tonnes of plastic waste from takeout alone.

Historical data tells us that about 75% of coronavirus plastic will probably end up as waste overflowing our landfills and floating in our oceans.

Our world was facing a single use plastic crisis long before COVID-19.

According to Plastic Oceans, 10 million tonnes of plastic are dumped into our oceans every year. That’s more than a garbage truck load a minute.

Annually, around 500 billion plastic bags are used worldwide, and more than one million bags are used every minute. These plastic bags have an average “working life” of only 15 minutes, yet they take 10-20 years to decompose, and they release toxic chemicals into the environment as they do.

Let’s not forget plastic water bottles. In 2018, 480 billion plastic bottles were used. That’s almost 1 million every minute. That’s enough plastic bottles to create a pile bigger than Rio de Janeiro’s Christ the Redeemer, and cover half the Eiffel Tower in just one day. 14% of all litter comes from beverage containers, and you throw caps and labels in the mix, the number is higher.

Single Use Plastic In Landfills

While we use plastic products for maybe minutes or months, they take years to break down. Plastic bottles, for instance, are estimated to take approximately 450 years to decompose in a landfill.

If our plastic ends up in a landfill instead of on the street or in our waterways, it will start to decompose under the heat of the sun (photodegradation)—that is, if sunlight can reach the plastic.

Landfills are actually made to maximize daily fillable area and longevity of the landfills. To make this happen, areas of the landfill are compacted, covered with a layer of soil, and compacted again each day to make room for the tomorrow’s waste. This means very little sunlight can get to plastics to kickstart photodegradation, so plastic waste doesn’t end up getting broken down.

It isn’t breaking news that single use plastic is a huge threat to ocean wildlife. It’s impact includes entanglement and ingestion of plastics, habitat degradation, and exposure to chemicals in plastics.

1 million marine animals are killed by plastic pollution every year. 92.5% of dead seabirds found in a study had ingested plastic in amounts equal to 5% of their body weight. According to the Ellen MacArthur foundation, there will be more plastics in our ocean than fish by 2050 if nothing changes.

The ocean surface shows only a tiny fraction of the impact. While there’s about 18kg/km2 of plastic waste floating around, there’s an estimated 70kg/km2 of single use plastics on the ocean floor, making up a whopping 94% of plastics that are dumped into the ocean (that’s 10 million tonnes).

Volunteers from around the world collected 20,772,394 pounds of trash at the Ocean Conservancy’s 2019 International Coastal Cleanup. Here are the top 10 items that they found on the beach and below the ocean surface. 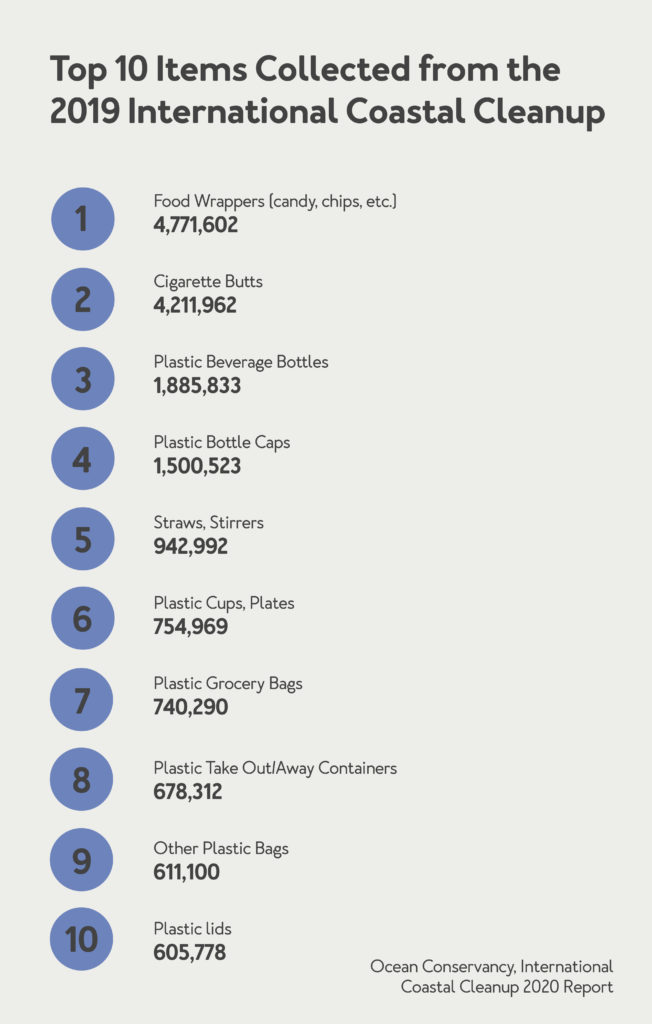 How plastic waste spreads in the ocean

Circular currents (gyres) thousands of miles across collect an enormous amount of plastic from all of the world’s oceans. Currents carry these plastics everywhere. Rubber ducks lost from a shipping container in the North Pacific ended up near Scotland, in the North Atlantic. Tsunami debris from Japan ended up in North America, crossing the biggest ocean on earth in just 10 months.

These tiny plastic particles have been making big waves in the news for their huge impact on our ocean’s health. We’re looking at 8.3 million pieces of microplastic per cubic meter of ocean. If you’re curious, microplastics are classified as any piece of plastic that’s less than 5mm in length. Smaller, nearly invisible plastics have been discovered that are equal to or less than 100 nm (1/10 000 mm) called nanoplastics.

When they’re in the water, microplastics act as a toxic sponge. According to Algalita Marine Research Foundation, these little plastics can be up to 1,000 times more toxic than the water around it. And the levels they’re found in our oceans continues to grow. Microplastic levels in the North Pacific gyre have increased 100x in the past 40 years.

Where do microplastics come from?

According to the International Union for Conservation of Nature, here’s a breakdown of the main sources of microplastics.

These small plastic pieces make their way into our waterways and oceans through our laundry machines, runoff, storms, littering and material erosion.

Ocean dwellers are the first to be hit with the effects of micro and nano plastics. Nanoplastic particles are even more toxic to living organisms than microplastics because they’re so tiny — they’re more likely to be absorbed into the digestive tracts, tissues and organs. These microscopic plastic particles can cause incredible physiological harm to freshwater and marine life, impacting neurotransmission, oxidative stress and immunity levels.

A study done on the consumption of microplastics in salps, tiny ocean-dwelling feeders, found that 100% of salps tested, no matter the size, species, lifestage or ocean zone, had microplastics in their stomachs. A devastating find, and alarming for the food chains of marine wildlife that involve salps.

Sooner or later, the impact of micro and nanoplastics makes its way up the food chain to us. Humans eat over 40 pounds of plastic in their lifetime — as we consume fish who’ve consumed plastics, these same plastics enter our bodies.

While the facts are staggering and often discouraging, we believe that being informed is the first step to making big changes for our planet. If you walk away with anything, here are the big learnings:

Looking for some small steps you can take to make a big change in the single use plastics crisis? Check out our Ultimate Guide to Plastic Free Living.