Professional sports haven’t traditionally been an eco-friendly industry — we cover the barriers and how it’s changing for the better.

Some industries get all the spotlight when it comes to sustainability, for better or for worse — think the fashion or food industry — while some fly quietly under the radar. No one really seems to talk much about professional sports and sustainability, at least not in casual conversation.

While it’s pretty tough to get some hard numbers on the environmental impact of the professional sports industry, there are some official stats that give us a peek.

What’s behind the staggering carbon footprints of professional sports? Research has exposed a few main categories.

Each year, the top 200 stadiums in the US draw around 181 million visitors. 85% of greenhouse gas emissions created by major sports events come from the travel and accommodation of fans.

When FIFA was held in Russia in 2018, 5 million fans made their way over to spectate, and produced around 1.6 MM tonnes of CO2 doing it. That’s the same emissions of 500,000 home’s yearly electricity.

While we all may have different opinions on stadium food, those chilli cheese fries and hot dogs end up having a staggering effect on the environment.

Take the 2018 Russian World Cup for example: food and beverage ended up making up the second biggest greenhouse gas emissions for the event at a whopping 105,695 tonnes of CO2. During the Rio Olympics, around 14 million meals were served throughout the Games, which gave off 180,000 tonnes of carbon dioxide.

When you host a major sports tournament, you build the facilities to match. That doesn’t just include the competition and training venues — we’re talking the offices, warehouses and meeting areas to support the event, athlete’s village, and the roads and bridges needed inside the zones. The intent behind these projects is usually to revitalize an area, but they do leave their environmental mark.

When the Rio Olympic Village was built for the 2016 Olympics, about 1.6 million tonnes of carbon dioxide emissions were generated. The prep alone for the infrastructure of the 2014 World Cup in Brazil generated 1.4 million tonnes of CO2.

While things may look grim for the sports industry, a surprising amount of changes have been happening behind the scenes.

The Emirates Stadium in England recycles 75% of their waste from game day, while Germany’s Allianz Arena has increased its energy efficiency by 60%, saving 362 tonnes of carbon dioxide per year. The Golden 1 Center in California creates 3,000 gallons of biodiesel per year by recycling the cooking oils used in their concession stands.

Some global sports events have even put sustainability at the top of their agenda. The Paris 2024 Olympics has an ambitious target: becoming “the Greenest Games Ever”. We’re in full support of that!

Let’s take a look at how the sports industry is shifting to earth-friendly practices in the above three categories.

You can’t stop sports fans from making the trek to cheer on their favourite team (with the exception of a global pandemic), but you can reduce their impact. Carbon offsetting has been identified by major sports leagues, like FIFA, UEFA and IOC, so they’ve been hard at work on low-carbon development projects globally.

Since FIFA started, they’ve been able to offset the 1.1 million tonnes of CO2 emissions that came from Brazil’s 2014 World Cup.

The European football league made a major sustainable move, announcing that it will offset all of the travel emissions from fans going to EURO 2020. Plus, they’ve partnered with all 12 host cities to give a public transportation pass to all fans that allows them to travel around the city with no extra charge on competition day, like FIFA did for the Russian World Cup.

The teams themselves have stepped up. For example, the French Federation of Table Tennis (yep, France’s ping pong team) has pledged that a minimum of 80% of their team travel will be using public transportation or car sharing.

Psst, wanna reduce your carbon footprint? Check out our Climate+ packages: we can help you go net-zero whether you fly internationally to support your team, take a weekend getaway for a game, or hit the road and make a trip out of it. Not traveling anytime soon for sports? We get it. You can also cancel the carbon footprint of your Netflix binging, the extra long showers you love, or your newfound food delivery habit.

There are options for professional sports organizations to work with sustainable and social businesses.

Take the Paris 2024 Olympic Games, for example. The Paris 2024 Organizing Committee and the Olympic Works Delivery Company (SOLIDEO) have joined forces with Canaux, the House of Social and Solidarity Economies, and the Yunus Center, to develop the ESS 2024 initiative.

ESS 2024 is a gateway between professional sports organizers, and the world of social entrepreneurship and circular economy. It’s purpose is to inform, mobilize and support sustainable businesses and entrepreneurs so they’re part of organizing and informing the planning of the Olympics.

Yoan Noguier, procurement manager for Rio 2016 Olympics and the founder of the Yunus Sports Hub, an organization that helps sports organizations solve social and environmental, makes an excellent point:

“A social business supplier may provide you the same product as a standard supplier, but will also address a local issue. For example, a catering company which only hires long-term unemployed people. This is the solution we’re proposing through ESS 2024 — maximizing the share of social business suppliers in the budget of sporting events, by informing them and helping them to be better choices than standard suppliers, also on operational and financial aspects.”

Because of ESS 2024, the Paris 2024 Olympic Committee has committed to using “100% sustainable and certified food sources for its competition”.

Even though new infrastructure will continue to be built for World Cups and the Olympics, there are strict standards for construction and design that aim to reduce the event’s carbon footprint, and make events more sustainable.

For example, all of the stadiums in FIFA’s 2018 World Cup in Russia were awarded green certifications for both global and Russian sustainable building standards.

Qatar’s Khalifa International Stadium will use district cooling to regulate their stadium temperatures, a technology 40% more efficient than the average cooling system.

Paris 2024’s Olympic Village will be made up of low carbon and eco-designed buildings to reduce the environmental impact of construction.

Amsterdam’s Johan Cruijff Arena, host of one of the 2019 Champions League soccer semi-finals, is powered by more than 4200 solar panels, which generate around 930,000 kWh of electricity each year. That’s 10% of the stadium’s previous annual electricity consumption.

While the sports industry does have a huge impact on the planet, it’s encouraging to see sports organizations take ownership to make their practices earth-first. And this is just the beginning of a revolution in the industry. 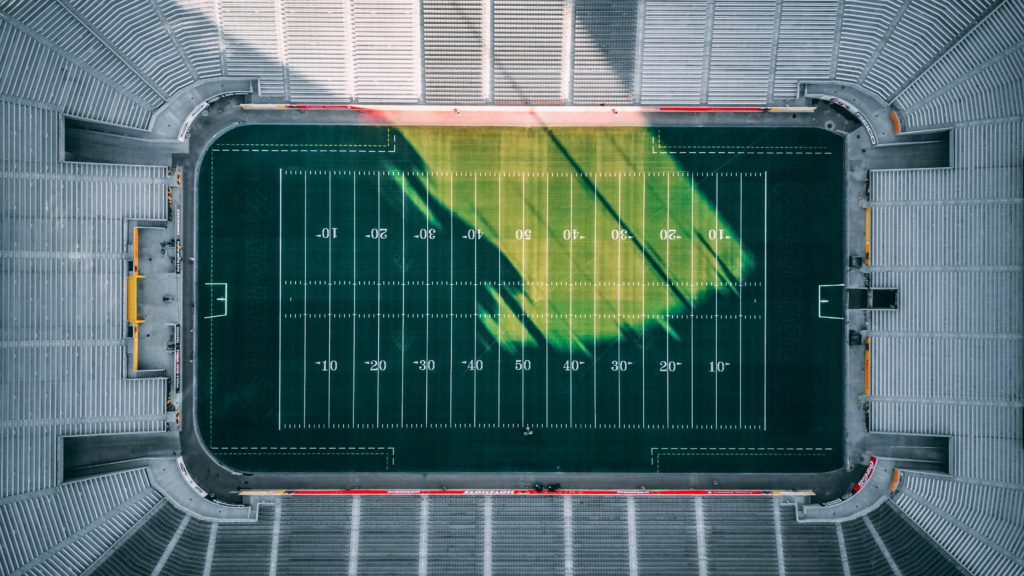 Looking for an environmentally conscious team to root for (or at least admire — we get team loyalty)? We’ve got our eyes on: