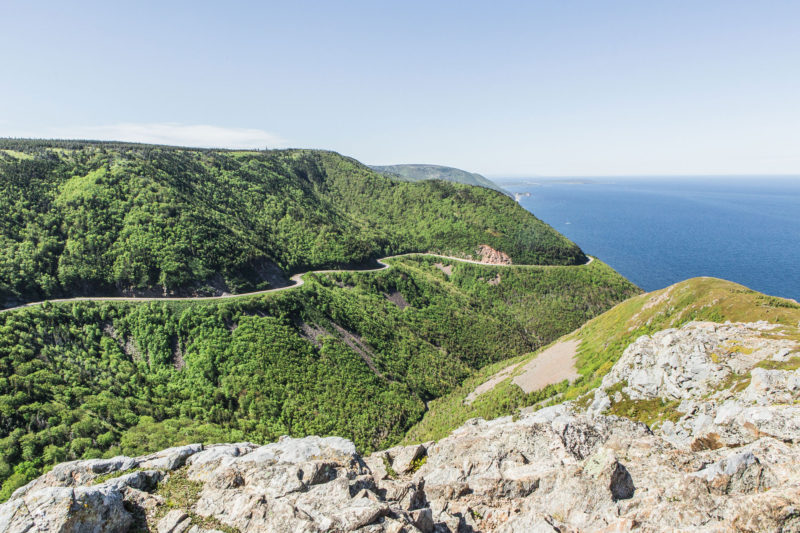 Located on Canada’s eastern coast on Cape Breton Island in Nova Scotia, Cape Breton Highlands National Park is known for its stunning ocean vistas where the mountains meet the sea. With a diverse landscape, the park is home to three distinct forest regions. Low in the valleys and coastal areas live the ancient hardwoods and lush softwoods of the Acadian forest, while Higher up on the highland plateau are the boggy wetlands and rocky barrens of the taiga. Between the two lies the boreal forest which is naturally dominated by balsam firs and covers one-third of the park. 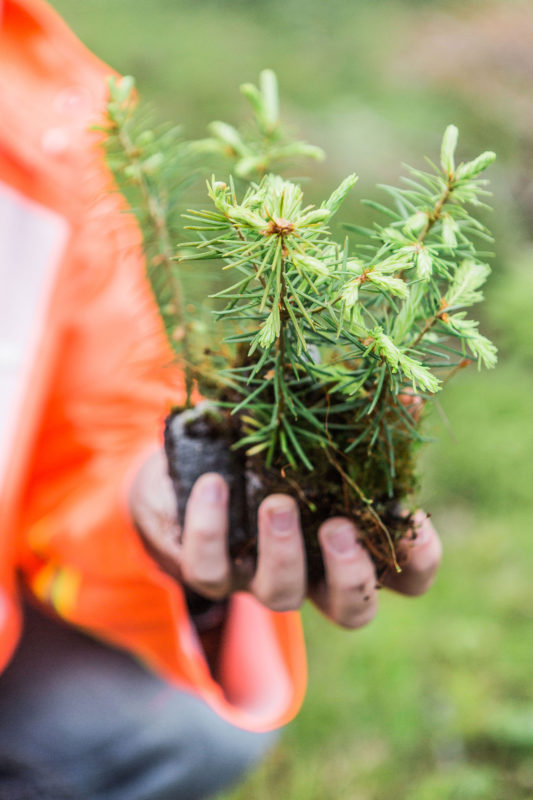 The balsam fir is the main coniferous species browsed (eaten) by moose in the area. If overbrowsed, balsam fir saplings will produce an excess of buds, distorting their usual conical shape into a thick sphere shape. In addition to the threat of overbrowsing, balsam firs are also the most susceptible species to infestations of spruce budworms. The seedlings we planted throughout the park came from seeds that were collected in the highlands of Cape Breton in the 1980s, from large mature trees that managed to survive a devastating spruce budworm outbreak. These seedlings were chosen as they are well suited to the rugged environment and harsh growing conditions.

Paper birch is a deciduous tree species that is often identified by its thin, whitebark that peels off into large sheets. Paper birch trees are pioneer species that excel at regenerating disturbed sites after destructive events like wildfires. Like the paper birch, white spruce are also suited to reforesting sites since they grow best in full sun conditions and are very tolerant of transplanting. 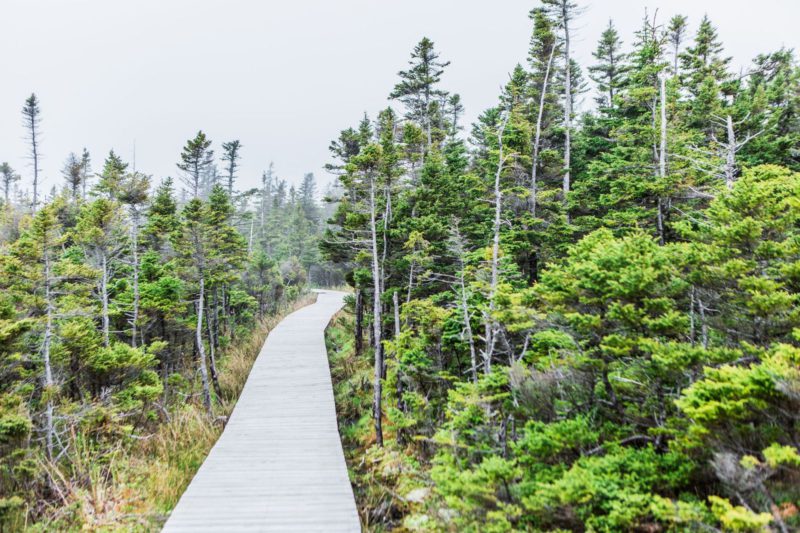 Cape Breton Highlands National Park used to be dominated by thriving boreal forest ecosystems that depended on a continuous cycle of disturbance and re-growth. Forests would usually experience a natural disturbance from something like an insect outbreak or fire, causing older mature trees to die. This would then open up the canopy making room for younger trees to sprout and grow, maintaining a natural balance.

But in the 1970-80s, a natural outbreak of spruce budworms consumed vast areas of Cape Breton’s balsam fir and white spruce forests. Young balsam firs and white birch grew quickly and started regenerating in patches across the landscape. But with an unprecedented abundance of new growth to eat and no significant natural predator or disease, the moose population exploded and stalled the natural regeneration of this forest. Patches of new growth forests quickly became overbrowsed before they could mature, leaving behind grassland where native forest once thrived. Today grasslands have replaced a third of the park’s boreal forest, negatively impacting the different species that depend on the forests.

Habitat destruction is the number one cause of wildlife endangerment and Parks Canada is committed to protecting animals and their homes by ensuring the health of their natural habitat. Species like the Bicknell’s thrush need thick conifer forests to build their nests and protect their young and are now recognized in Canada as a threatened species at risk. The Canada lynx and American marten also rely on a healthy boreal forest ecosystem for food and protection and are considered endangered by the province of Nova Scotia. 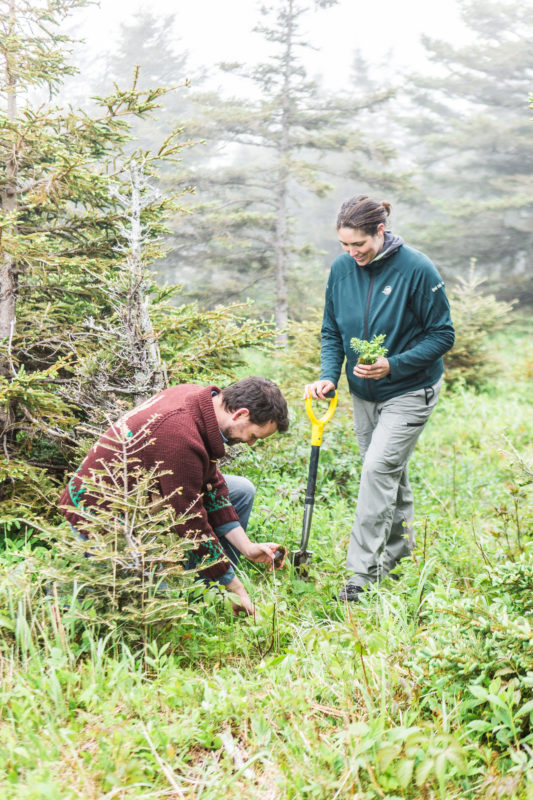 For this project, Cape Breton Highlands National Park also worked closely with the Mi’kmaq community through the Unama’ki Institute of Natural Resources (UINR) to find sustainable solutions to restore the boreal forests with respect to environmental and social values. Fostering strong partnerships between indigenous communities and national parks is critical to successful land stewardship. 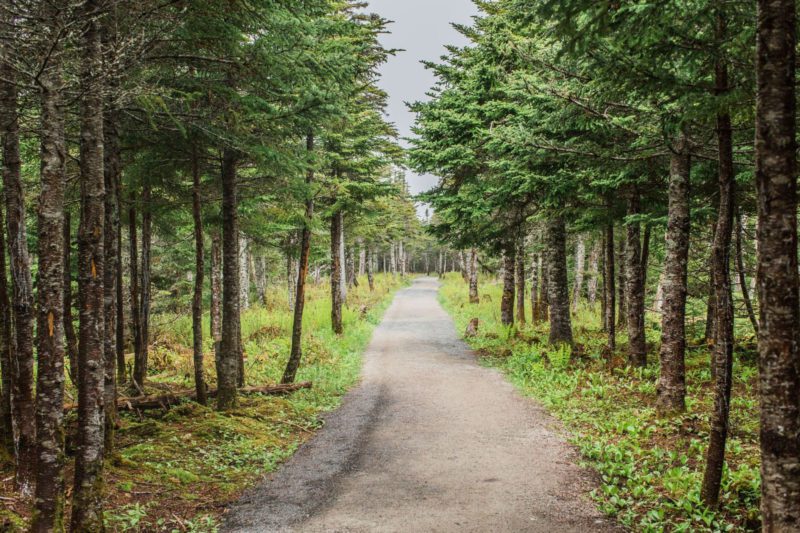 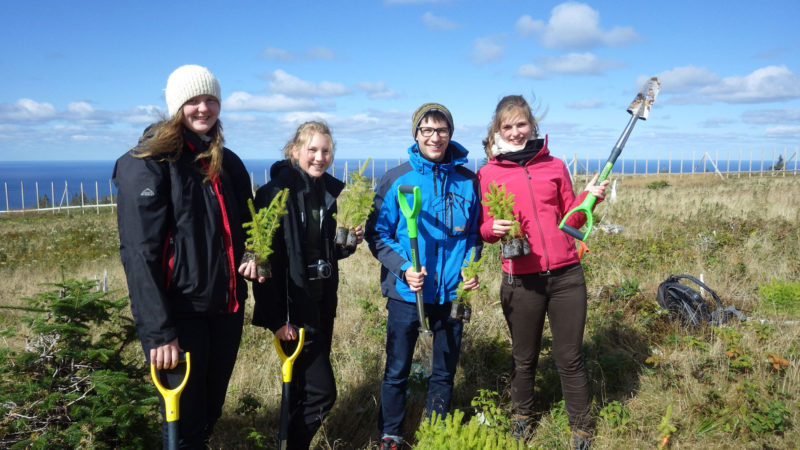 Here are the SDGs that we’re addressing in our Cape Breton site:

#14 Life Below Water: Conserve and sustainably use the oceans, seas and marine resources for sustainable development.

#17 Partnerships For The Goals: Revitalize the global partnership for sustainable development.